(Editor’s note: OV1 holds the voluntaryist view, that participation in electoral politics is wrong.  Some Anarcho-Capitalists DO participate as do other types of anarchists.  One of voluntaryism’s distinctions from AnCap is that we are of the non-participation camp.  We are publishing this article because “Voluntaryists and Electoral Politics: Irreconcilable Differences?”  is a well done piece, even if the tone is not in line with our “tone.”  🙂 )

Among voluntaryists and anarchists, there is always much discussion and debate over the question of what role, if any, anarchists should play in electoral politics. The anarchist community is split on this question.

The first school relies on several beliefs. First, that the action of voting (and electoral politics generally) “grants legitimacy” to the state, and to “democratic” politics as a method of selecting “rulers”, all of which of course are illegitimate to anarchists. Secondly, that voting is totally ineffective as a means of advancing anarchism and anarchist goals. Lastly, that voting is a distraction from other more productive and philosophically and ethically consistent means of resistance to statism, including agorism, counter-economics, secession, education, advocacy, even possibly revolution.

The second camp would posit that anarchists should follow their own individual conscience and reasoning, and that there is no “anarchist position” as to participation in electoral politics. Anarchists can abstain from voting entirely, or can engage in certain circumstances, or can actively and enthusiastically participate in politics. No path is disqualifying. None of these approaches in and of themselves are antithetical to anarchism or to anarchist principles.

The last group believes that anarchists have a moral and ethical duty to resist the state and statism with whatever tools are best available and most pragmatic, including political activity and voting. Anarchists should strive to move society and “governance” in as much an anti-statist, libertarian and anarchist direction as possible. Under our current system, voting and electoral politics is the most effective and meaningful tool to affect society and to limit, reduce and even potentially eliminate the state.

As the first camp is the largest (and most vocal) let’s focus on their arguments for now.

Does engaging in voting and electoral politics “grant legitimacy” to the state? In my view this is quite a lacking argument, although it is extremely popular among anarchists, and probably the majority view. For the time being at least, the state exists, whether one votes or not. “Legitimacy” is in the eye of the beholder. There is nothing intrinsic to the act of voting, or to the “non act” of not voting, which either “grants legitimacy” to the concept of the state, or detracts from it. Same for other political participation.

Anarchists here are adopting a classic statist fallacy, that any participation in or use of the “system” (voting, using roads and mail, attending public schools, etc) is an endorsement of and consent to the authority of the state. Very few anarchists maintain that in order to be a “real anarchist” one must live in the woods and have no interaction with the government or society as a whole. Yet very many hold this exact position when it comes to political interaction. While it is true that it is far easier to not vote than to avoid using “public” roads, the statists reasoning is the same: “Participation and use = consent”.

Why do so many anarchists mimic self serving statist arguments when it comes to voting, but rightfully and eloquently refute the same illogic in all other instances? Of course this flimsy argument plays right into statist hands, because if accepted it means that anarchists forfeit the entire political process, and public policy as a whole, to statists and warmongers, who are under no such self imposed handicap with regard to elections and politics. While those anarchists who only care about their own imagined “purity” are fine with that result, others should not be.

Another belief of “apolitical absolutists” is that voting and electoral participation is ineffective as a means of advancing anarchist goals and resisting authoritarianism. There are several problems here.

First, it is entirely speculative. For example, would the US war on Vietnam have concluded when it did (as opposed to continuation and probable escalation) without the political involvement of the anti war movement, including support for anti war politicians,and opposition to pro war politicians? Would slavery have ended when it did? Would any progress have been made against draconian drug laws? Would taxes be (even) higher?

If, for instance, only pro war or pro slavery, or high taxers or drug warriors vote, what effect would that have? Of course, electoral politics is not the only factor in these questions, but certainly it plays a huge role and is often determinative.  And politics does not only involve selecting legislative and executive office holders, but referendums, constitutional amendments, ballot initiatives, judges, etc.The fact is that the conclusion that all political activity is and always will be ineffective is without foundation and entirely speculative.

Also, the “politics is ineffective” mantra is of course self fulfilling. The more liberty oriented people accept that self defeating proposition, the more true it will become, to the joy of authoritarians everywhere. The latter will even more easily control the political process, and the direction society takes. The size, scope and reach of the state will be larger than it otherwise would be.

As far as the third apolitical/anti-political argument outlined above, it is also unconvincing. In general, when people say something is a “distraction”, it means that they are allowing themselves to be distracted. Such need not be the case, certainly not for everyone. Agorism, counter-economics, secession, education and advocacy are obviously extremely worthwhile anarchist endeavors. Nor are they mutually exclusive in any conceivable way. To the contrary, political action can certainly serve as education and advocacy. Consider Ron Paul’s two runs for the Presidency.

Of course the most meaningful debate is not over the mechanism one uses to advocate ideas, but rather, what is one advocating? What principles? What values? What pragmatic approaches to real world issues and situations? What philosophy? And, can coalitions be formed, of people who are not in agreement on everything?

Anarchists by definition must oppose statism/authoritarianism, war, state theft, violence and coercion. Anarchists are against violations of civil liberties, against invasions of privacy, against state privilege and favoritism, against corporate welfare and subsidies , against oppressive and counter productive economic controls, etc.

Or, if one prefers to be “for” rather than against, for economic, occupational and personal freedom. For rights of property, association, travel and free expression. For peace and non violence. For personal autonomy and dignity.

In this brief essay a case is made that targeted political activity can be consistent with anarchism and anarchist goals. However this obviously is not to say that political activity is the only method, or that all anarchists should feel compelled to engage in such. Compulsion is certainly not consistent with the spirit of anarchism, nor with the principles of individual conscience and autonomy that anarchists hold dear. Anarchists should engage in the type and level of efforts they are best suited for and comfortable with. This will of course differ person to person, case by case and may involve multiple approaches. 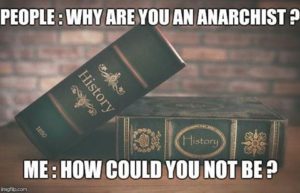