“No one needs an assault rifle!”

So why do so many cops carry them? Is there some evil force that magically is a threat to them but not to me? Where are the leftists calling for disarming the mercenaries known as “law enforcers”?

“These are weapons of war!”

So who are the cops at war with when they carry AR-15’s?

This might sound odd, especially to people who are accustomed to the usual paradigm spewed by the media, but it’s true: I carry a firearm out of love, not out of fear or hatred.

Yes, I spend a lot of time loudly and vehemently condemning injustice and aggression. I do that BECAUSE I value and love peace and justice. If I didn’t care about the innocent, I wouldn’t rail against, and be armed against, those who try to harm the innocent. (I think the likelihood of having to defend MYSELF with a gun is a lot lower than the likelihood of me having to defend someone ELSE with my gun.)

The vast majority of gun owners I know do not think, “I can’t wait to kill someone!” Instead, they think, “Killing someone, even if justified, would be completely horrible. But I will do it if I have to in order to protect the innocent.” That attitude and mindset comes from LOVE, not hatred.

Now, if you personally are NOT willing to take on the risk, burden and responsibility of being a protector of the innocent, that’s your choice. But kindly refrain from demonizing those of us who are.
– Larken Rose

Soooooo…. an anarchist running for President. Let’s consider the possible outcomes, shall we?

1) At the time of the election, nowhere near a majority of Americans are anarchists, so the anarchist loses, and can’t do anything “within the system.” By playing the game and “participating in the process,” the anarchist also validates the game that was just lost, thus implying legitimacy to the new statist regime.

2) At the time of the election, a majority, or at least a significant minority, of the population is anarchistic. Most of them, being anarchists, don’t believe in the legitimacy of “government” and therefore won’t vote. However, they also won’t NEED to vote, because when 50%—or even 10%—of the population stops believing in the myth of “authority,” they can simply disobey the ruling class out of existence (with actual resistance being optional).

Is there some third option I don’t see? Because the first two make such an endeavor seem drastically pointless.

The best way–damn near the only way–to stop bad people from committing violence against innocents, is to have GOOD people able and willing to use defensive FORCE to stop them. This isn’t really debatable.

“We need a law!” Words on paper? And then what? Guys with GUNS to enforce it? Congrats, you just acknowledged that BRUTE FORCE is necessary to stop violent aggressors. Unfortunately, you also chose to rely on professional aggressors to “protect” you, which is both logically and historically asinine, AND constitutes advocating aggression against lots of people who haven’t harmed or attacked anyone. But hey, at least you got the first part right.

If you’re a good person who is tired of hearing about other good people being victimized, maybe you should BECOME one of the good people who has the ability and willingness to use FORCE to stop the bad guys. Nothing else will stop them. Why would you assume it’s always someone ELSE’S responsibility to do it? 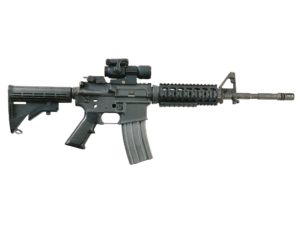