The Island Analogy by Larken Rose

THE ISLAND part two – The kinds of arrangements and agreements that people naturally form may include leaders and even hierarchy but people do not naturally want or accept violent domination.

THE ISLAND part three – Whether they know the terminology or not people already instinctively know the difference between consensus and domination between self-ownership and slavery between property rights and theft between subjugation and cooperation And without prolonged indoctrination they naturally choose voluntaryism over statism.

THE ISLAND part four – One of the most common concerns that comes up when people start to think about a stateless society is But who will protect us from the nasty people The bad news is freedom is inconvenient because it requires personal responsibility The good news is that it also leads to far more moral and rational solutions than government ever would.

THE ISLAND part five – Two more common concerns about a stateless society national defense and but there are too many people to do things that way are laid to rest using the island analogy. 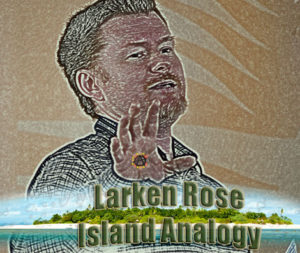 February 2016!  See our post with video links to his presentation here:  https://openlyvoluntary.com/island-analogy-larken-rose-html/