*Note – these awards are for libertarians,
NOT members of the Libertarian Party.

On New Year’s Eve 2020 I sat with my wife and happened upon Disenthrall’s live show. In the year since then, we have gotten to know Disenthrall Principals Patrick, Kason, Ryan and Christian. This team, led by Patrick Smith, has exceeded expectations and earned the top spot in our first annual Libertarian Philosopher of the Year awards. 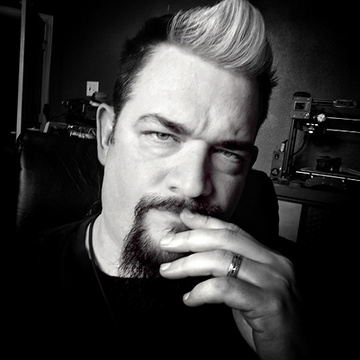 Disenthrall is a philosophy show that is broadcast on various video and audio channels. Additionally, they nurture a community through various other tech outlets like Discord and Telegram. They are unsurpassed in their intellectual rigor and dedication to reason, logic and the rules of argument. They welcome anyone to come onto their show to discuss ideas with them, and especially encourage people with whom they disagree.

Here at Openly Voluntary, our focus is on a particular “tone” and “demographic.” Disenthrall’s target audience is very different. Patrick often wears a mechanic’s shirt, has a mohawk haircut and abnormal goatee while Christian will often wear a suit or a science-geek T-shirt. Christian vapes and helps his elderly dog onto his bed to snooze and snort in the background. Patrick lights up a fancy tobacco pipe and has a 70’s neon groovy background on his green screen. Kason makes very distracting, immature and sometimes hilarious faces, and mimes out whatever the current speaker is saying. The crew are fans of the “gaming” culture and are proudly not “normal.” I almost always love their words, but I could never share their episodes with my aunt, businessmen friends, clients or family. My chemist doctor MENSA cousin who hates to be hugged and plays Dungeons and Dragons? Yes.

So, why does Disenthrall win the most prestigious award for libertarian philosophy? I am glad you asked.

Fun tone. I am not a Millennial. I am a middle-aged grandfather, businessman, author, consultant, teacher and overall, “Boring Boomer.” The Disenthrall show is not made for me, and yet, I love it. Some philosophers have more followers and some have bigger audiences, however none can compare in terms of the real libertarian intellectual meat being served up for folks with big hungry brains. Disenthrall has surpassed even Michael Malice in 2021 as the best Philosophy Show.

Ridiculously well read-hosts. While watching Disenthrall, you will hear Christian mention an ancient philosopher whose name you recognize. Patrick will chime in and agree while mentioning one of the great contributions that philosopher made to the field of Moral Philosophy. I thought I had a basic understanding of philosophy, however when I compare myself to these giants; nope.

Intelligence. Kason tops the group of Disenthrall hosts with an IQ of 157 (2 points higher than Elon Musk)(Estimated). Patrick, Ryan and Christian are also highly intelligent. Their quick wit, ability to organize thoughts and predict challenges, then build up defenses to those challenges is impressive to watch.

Humility. Ryan is eager to learn new things, and when I have had the privilege of hearing the backstage pre-show chatter, and he genuinely seeks knowledge in all areas in which he is interested. Unlike so many men who are terrified of being proven wrong or being shown up in front of others, Ryan and the whole crew are eager to be proven wrong. For the past year I have yearned to put Cocksure Christian, who appears to be 17 years old, in his place, however I have not yet been able to defeat him on the intellectual battlefield. His point always seems to be the correct one. The very first show I watched, Kason challenged Patrick on something that Patrick had said. Patrick paused, then responded, “God damnit. You are right.” Patrick was clearly thrilled to have had the gift of Kason’s intellectual wet stone to hone his own worldview. Big men typically behave insecurely, and the whole crew of intellectual giants are unphased when they are corrected.

Intellectual honesty. The rigor with which this crew addresses issues is unsurpassed. If an “argument” violates reason, logic and general rules of argument; these guys will call it out immediately. Most successful people (both financially and smart thinkers) suffer a poverty of intellectual challengers. Disenthrall stands ready to respectfully stand up to anyone and any idea. With clear heads and a thirst for a worthy opponent, these giants of libertarian thought have yet to be defeated.

Intellectual consistency. This ties in to what we have mentioned above, however Disenthrall has earned a repetition of this point. An example is the idea of sticking with reason when considering liberty from an intellectual perspective. Some people might consider Donald Trump, Pete Quinones or Ronald Reagan to be “libertarian.” It is true that in some areas that these men subjectively selected, they do prefer some degree of liberty greater than some other folks might prefer.

Philosophers. As Patrick says, “Philosophy is hard.” Christian and Patrick agree that despite thousands of people trying for thousands of years, no-one has “solved philosophy. As moral philosophers, Patrick, Kason, Ryan and Christian readily acknowledge which parts of their discussions are subjective opinion or objective reality. They have helped me become a better thinker and have challenged my way of thinking.

After a multi-year battle with leukemia, Patrick’s daughter was able to ring the “I am OK” bell in 2021. Patrick’s bank account had taken a huge hit, and despite the stress of the experience, his family grew closer. Not only were Patrick’s amazing wife and blood kinfolk there to help, Patrick noticed the the local voluntaryist community had come to their support. He contemplated the cost of the treatments and libertarian’s belief that charity should be voluntary. This motivated him to pull an old idea out of brain storage and make it happen. In 2021, Patrick, along with help from Christian, Kason and Sherry Voluntary, started a  libertarian charity called Voluntary Virtue.

Patrick sometimes narrates books. When he finds worthy book, he does all of the audio production, voiceover and even uploading to Audible for the author. This is a labor of love that Patrick believes to be worthwhile for humanity. Some books include Defending the Undefendable II by Dr. Walter Block, The Most Dangerous Superstition and Anarchy Exposed by Larken Rose, No Treason – The Constitution of No Authority by Lysander Spooner and Unschool Yourself First by Mark Beaumont.

e
Patrick reads books and offers commentary live. These “Let’s Read” recorded shows are then put online for free. They allow me to listen while driving and to hear really smart commentary.

Patrick was given the reins to the largest anarcho-capitalist show, “TheAnarchast.” This show has interviews about philosophy, but also a lot of content that is embarrassing to libertarian philosophers. Patrick has maintained his integrity while navigating the world of medical quackery, conspiracy theories, love chakras and other HooHoo stuff, “plant based medicines” and other fringe topics that were of interest to some people who had joined the TheAnarchast community. Patrick has proven true to the show while maintaining his own integrity. Really, his Disenthrall show is much better.

With all of his work in libertarian activism, some of which is mentioned above, this software mogul must have unlimited time, right? He must be retired? No, after a dispute with the Book of Faces, Patrick soon accepted an opportunity to lead a startup social media platform’s tech efforts.  As Chief Technology Officer of FLOTE, Patrick leads an international team of developers who will soon launch a functional social media platform called FLOTE! Unlike conservative or liberal platforms, FLOTE will not be censored. Left, Right or Rational, post what you like. There are community standards, however diverse philosophies are welcomed.

Where to find Disenthrall:

*(Yes, they have a website, but the appearance/layout encourages use of the above sites instead.)

First Runner Up for Libertarian Philosopher of the Year 2021

Keith seeming “burst onto the scene from nowhere” not long ago and has become a prolific content producer. He is clearly very intelligent, well-read and logically consistent. Keith has the guts that few other content producers have, and asks “the big names” for interviews, which he produces for his audience. Make sure to check Keith out HERE. He is much more than a talking head, he has studied extensively and is very knowledgeable in libertarian philosophy.

He is also very involved as a volunteer and contributor to the Libertarian Institute. Congratulations Keith Knight for earning First Runner Up in the Libertarian Philosopher of the Year 2021 awards!!

This is a good example of the thinking of Patrick & Keith, the winner and runner up!

Second Runner Up for Libertarian Philosopher of the Year 2021

Michael Malice is the host of the “YOUR WELCOME” podcast and an excellent author. It is Michael’s guest appearances on other shows that has earned him the second runner up award. His appearances on Lex Fridman, Glenn Beck, Jordan Peterson and Joe Rogan have helped spread the ideas of Anarcho-Capitalism to millions of people. While Michael does not stick to his principles as closely as Smith or Knight, he typically has a solid message and is well-versed on history and current affairs. Congratulations Michael Malice for earning Second Runner Up in the Libertarian Philosopher of the Year 2021 awards!