A few hundred or so people see the post, then it will never again be seen, except if the folks at the Utah Data Center. This is a waste!

In this post, I will from time to time add comments and original posts that these people. I hope you enjoy them.

(Regarding this meme that stupid commenters did not “get.”) 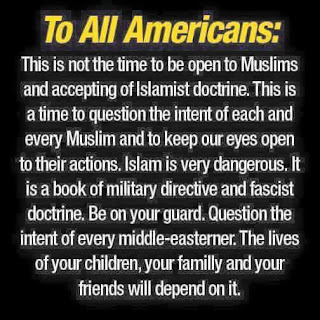 Muslim is not the same as “middle eastern”. In fact, there are more Muslims in Asia than in the middle east.Islam is not a book. It has some holy books, but it is not a book. This is not the time to be accepting of Islamophobia and the cottage industry that peddles it. This is a time to question the intent of every idiot who regurgitates nonsensical gibberish whilst pretending to inform you of a danger. In any other context, we call these people “charlatans”. Stupidity and charlatanism are very dangerous. They can make you appear to be an uninformed moron, and if consumed on a long enough timeline, they will lead you to actually becoming stupid, not just looking the part. Be on your guard. Question the intent of anyone who tells you to fear someone else. ESPECIALLY question the intent of those who promise to protect you from boogey-men.


My sense is that if you talk to a professional in any walk of life today, whether it’s technology or finance or medicine or law or government or whatever, you will hear a similar story of hollowness in their industry. The trappings, the facades, the faux this and faux that, the dislocation between public narrative and private practice … it’s everywhere.

The government needed animal fats for making explosives and for feeding soldiers. Fats have the highest density of calories per unit of mass, as well as proteins needed in physically stressful situations, like infantry warfare. Ask any good drug smuggler or truck driver and they will tell you that increased potency or concentration in a smaller mass is a good thing when transporting long distances.

To soften the economic shock of this new and sudden demand, especially on the heels of the disastrous Hoover and Roosevelt agricultural policies, the government took to all sorts of programs and propaganda designed to get the American consumer to self-ration fats, rather than imposing outright price controls and rationing. One of these had to do with outright lying about the health effects.

Then, after the war was over, the substitute markets and the fellow travelers who sprung up around them saw their fortunes threatened…….so they hired a doctor……..who produced a study showing that he studied the population of 7 countries and found animal fats to contribute heavily to the onset of heart diseases and obesity………The problem was that he actually studied 22 countries and found no causal link in 15 of them, so he threw out that data. To this DAY, that doctor’s “study” is the basis for all of this bullshit………